I’ve been there before. I’ve been there at least a handful of times. And every time I thought the place was pretty. I’ve always admired the sky, even if all I could see of it was a thin strip, covered in gray storm clouds heavy with rain. I’d seen the mountains before, but only from far, and they just appeared to be this mass of earth that I’ll possibly never reach. This time, I wasn’t excited like before. I wasn’t overly happy to be traveling because my baby cousin had spent the previous night crying. And when I got there I had a headache. Yup, I thought, not the grandest journey I’ve made.

I was wrong. And I found that a couple of days later, when we went to see the legendary Tekerghat limestone lake. Limestone lake? I don’t know. I saw a ton of coal. I know that. And I know I saw the mountain up close. What had looked like a gray fuzzy mass of earth from Netrokona all the way to our lodge in Taherpur 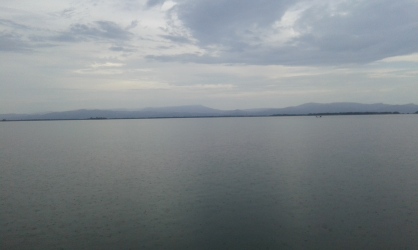 was now a giant right in front of me, complete with mountain paths, steep slopes lined with huge boulders of coal and limestone and tiny waterfalls.

I could hear the gush of the water everywhere I went. I could see through the water the pebbles below. because of the terrain, the water there actually looked blue and green.

Then we went  to Birisiri. And the promise we went with was left unfulfilled (blame the guide). But I got to climb a hill in Lengura. We chose a steep path for some reason, and once we were at the top of the small hill our legs had given up on us. I had neither the heart nor the strength to get up, but the view pulled me along. More mountains, trails along their sides, tree canopies shading their soil. Before, I thought one could only tell the grandness of something if one looked from its root. I realized that day, you can only realize how far you’ve come if you look down at your root. You don’t have to go back, it

is enough to reminisce. And I wanted to stay there forever, only, I had a prayer to catch and my brother, a bus back to Dhaka.

And then came the day I had to come back. I wanted to keep my eyes on them for a long as I could, on the boat, then on the car. But the turns we had to take were a bit too much for me. We drove for a couple of hours along the countryside, the sky stretching in all directions above us, the blue of the water and the green of the earth spreading out beneath us. As we neared the more developed villages and concrete buildings came into view, I felt a gnawing anger and annoyance crawling up. How dare these people claim that space? How dare they block the world from the beauty and freedom of the open sky?

I missed the open view of the village where we stayed already. I missed the sunrises, when the mountains split open to let loose the burning orb of light from a river of fire. The day-time azure, when one could see the sun shining in its glory, and the moon, humbly awaiting its chance. I missed the sunsets, when the dying light turned the azure at the horizon into molten gold and threw colors from the entire spectrum into the humongous canvas that was the sky. The moonlight was lost in the bright electric lights of the city.

It will take me days to get over 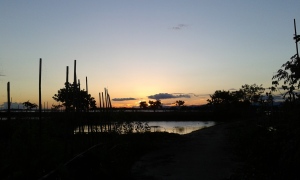 this. I cried on the car on the way back, even though I knew I’de be there again before a year passes. I felt like I was betraying them by turning my back on them, the mountains. I’ve never felt like this toward anything in my life. If I’d just turn around, I’d see them again. I could feel their memory pulling me like a string tied to the back of my head. I knew I was too far to see them, but I felt that way all the same.

If I’d just start walking the way we came maybe I could go back to them.

I knew I couldn’t go on my own. I didn’t know the way. But I felt that way all the same.

I had these words planned in the car, when I sat looking longingly at the sunset, craning my neck too far for comfort. I knew I wouldn’t see a sunset or a sunrise for a long time.